Menu is very intuitive and easy to navigate.

There is a surprising large amount information for various cuts of meat and vegetables/fruits, even lesser used cuts such as sweetbreads and pork spleen; and usually 2-3 different combinations of temperature and time for each cut.

You have the ability to add a certain cut to your ‘favourites’ menu, making it easier to select, say…. “pork belly’ almost instantly, if for some strange reason you want to cook pork belly everyday for a week.

It costs S$1.99, which is pretty cheap for a wealth of sous vide information.

Lots of good background information like food safety, intro(how sous vide is beneficial), a ‘how to use this app’ section(pretty similar to the intro), and sous vide resources (mainly the more infamous sous vide links). Although to be fair, all of this can be read on 1-2 webpages online.

Some pretty informative writeups on different cuts of meat, such as chicken breast; talking about how well it benefits from the sous vide technique, the difference in textures between cooking it high and short, and low and slow. (Not all cuts have such informative writeups, more on this later) 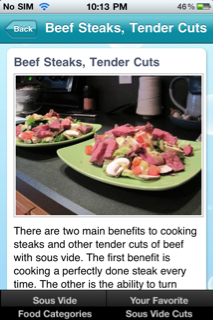 The menu is very minimalistic, which isn’t a bad thing for me, but some may find the application a little ‘visually bland’

In the rare instances that they use photos in the app, the photos aren’t very appealing or flattering to the food

As I mentioned earlier, some cuts of meat have very informative writeups, while the majority of others use a pretty standard template, meaning they don’t really describe how the different temperatures and cooking times affect the outcome of the meat, which I personally think is the most valuable information.

I was pleasantly surprised with this application to be honest, I had expected minimal information on the more common cuts of meat, but there is quite an extensive list provided with the application. Everyone seems to have a different idea on which temperature and time combination to use for any particular cut of meat, and each yields vastly different results. This application takes out the searching element for you, it tells you the possible combinations; but where it falls short is telling you how each combination affects the outcome of the meat. You often get combination headings like “Rare”, “Ideal”,  and “Traditional”, which seem pretty cryptic because everyones intrinsic value to what “ideal” and “traditional” should be can be completely different. Very often when I’m cooking sous vide and Im tasting the final product, I know its good, but I’m not entirely sure if I’m doing it right- Yes this is a delicious duck confit, but is this what the duck is supposed to taste like after being cooked at 75C for 9 hours? The application lacks the information to clear this up.

Also, while most of the temperature/time combos I agree with, some seem to jump out in a bad way. “Rare” chicken breast is cooked at 57.8C for 1-4 hours, that strikes me as being incredibly low and unsafe. Every blog that I’ve been to on sous vide has never gone below the 60.0C mark for chicken, it really makes me wonder where the app is getting their combinations from.

That being said, $1.99 is a very small price to pay for all the temp/time combinations provided, if you’re too lazy to run a google search for that cut of meat you are about to cook, and cross check cooking temperatures and times between 4-5 blogs, then this app is definitely for you.