I arrive at Restaurant Anis at 10am, about 2 hours before lunch service starts, chef Susumu Shimizu is already an hour into his prep. He runs a one man show in this restaurant; he preps, cooks, serves, busses tables, and just about everything in between. I peek into the kitchen and spot a whole chicken and baby pig legs on a flat top grill, as the meats sizzle away, there is a sense of quiet calmness in the restaurant.

He welcomes me in and starts to talk about his history in the kitchen and his style of food- The 2 years spent cooking at Alain Passard’s L’Arpege restaurant in Paris have given him the fundamental philosophy of cooking meat low and slow, but Shimizu has taken those ideas  and made them his own at Anis, in the form of a beautiful low temperature Plancha on which he does all his slow cooking on.

Throughout the course of the next few hours, I watch as Shimizu-San rotates a Daisendori(大山鶏) chicken and pig legs into strange positions, first resting the chicken against its side so that its thigh/drumstick area develops quite a bit of colour, then rotating it against the back bone where the neck area usually resides, before turning it around so that the exposed drumstick bones come into contact with the plancha. The meat is not seasoned and the chicken cavity is stuffed with lemongrass and nothing else. 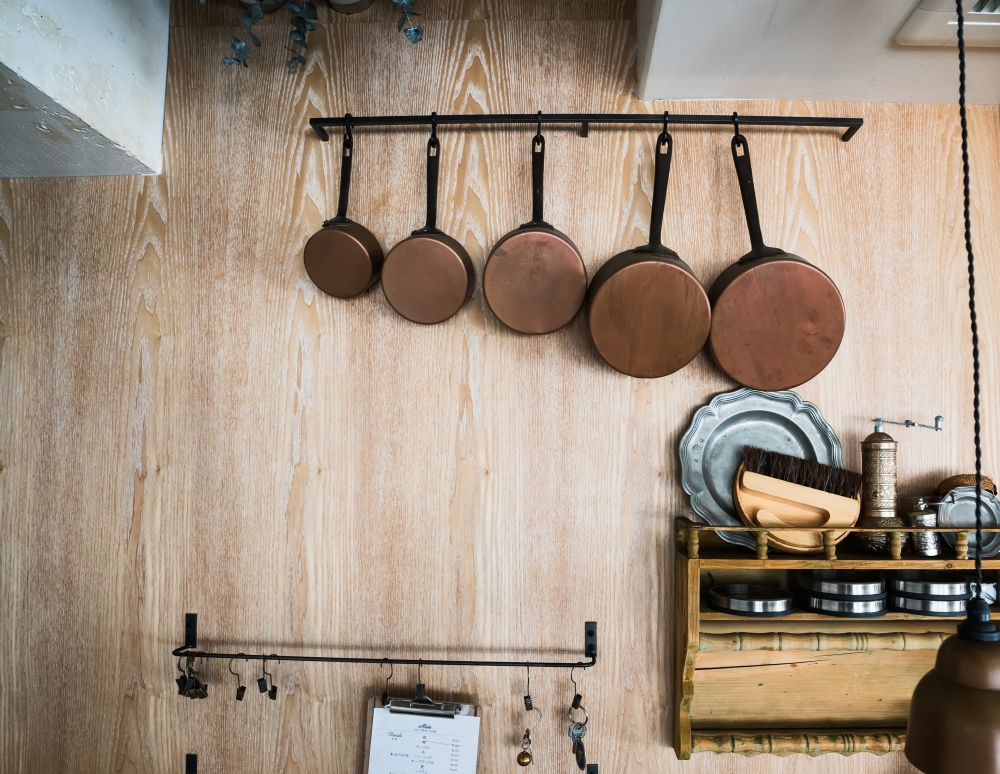 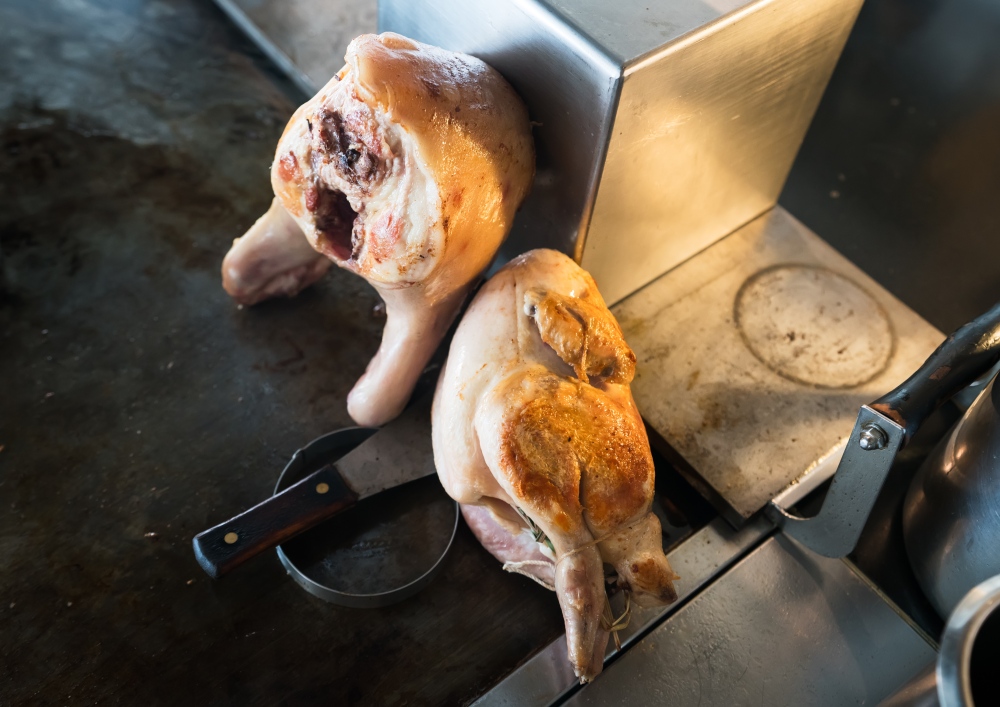 “The idea is that apart from the initial sear on the drumstick, the meat doesn’t actually touch the heat source, the bones of the chicken will carry the heat through the bird and cook it slowly from the inside out.”

That is the essence of his cooking. The meat spends minimal contact with the heat source, instead cooking indirectly through the bones as they conduct heat. In fact, the breast of the chicken only touches the grill for no more than 10 seconds to cook out the raw flavour of the skin. It is almost therapeutic listening to the slow sizzle of the meat on the plancha, as I wonder in my head how long this will take to cook. 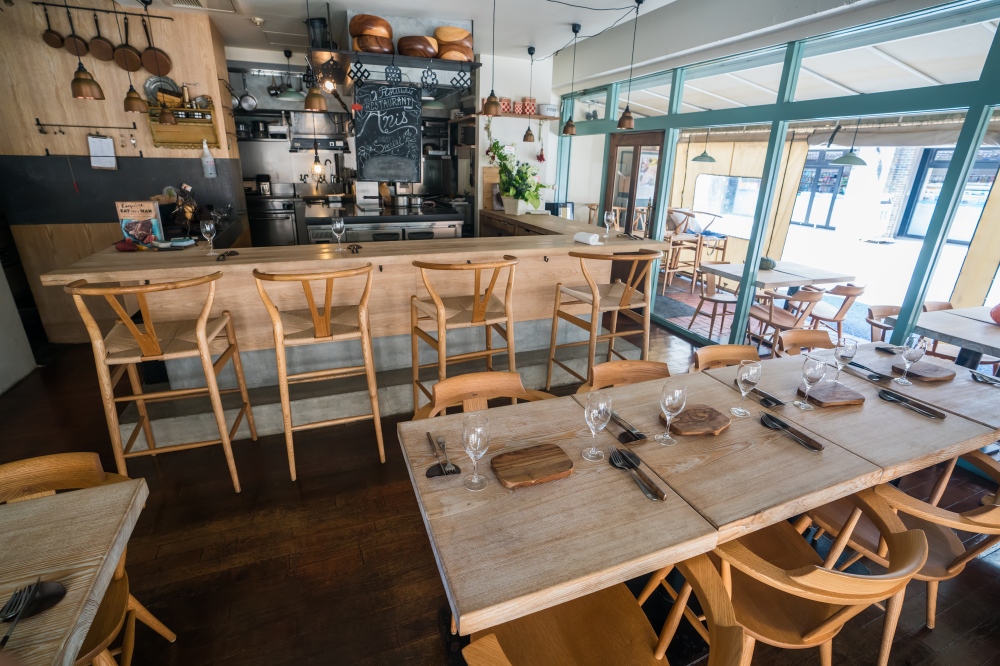 “Do you know the Arpege onions?”

“Yes, I think I had them a few years ago. Onion gratin, right?”

“The onions have to be evenly coated in melted butter, and the butter must not be put on high heat, otherwise the butter will split and you will not have a good sauce” 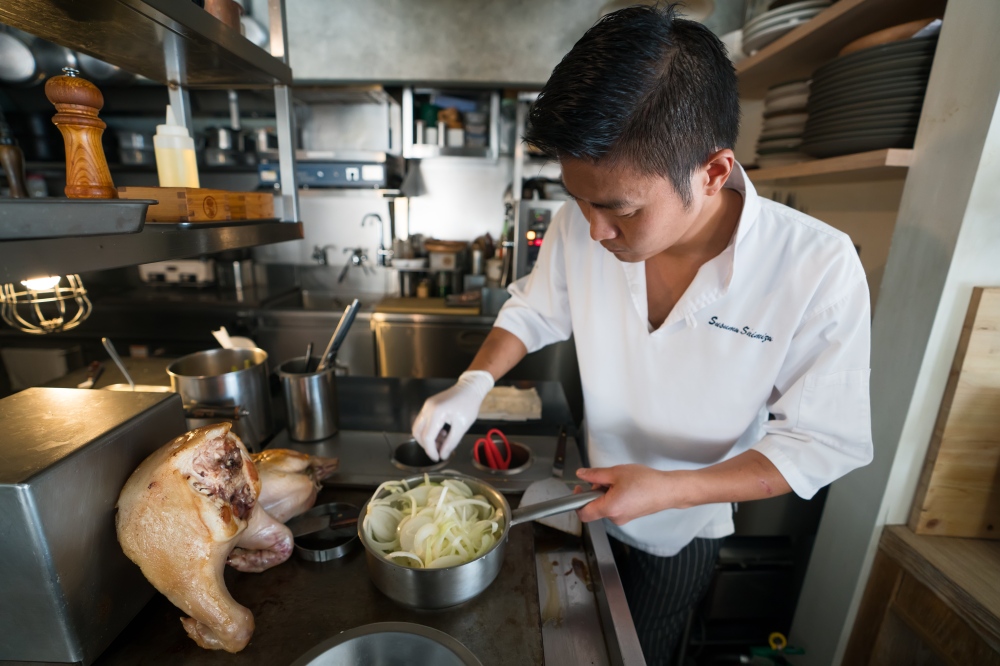 I start to reflect on the culinary world that we live in, a world where efficiency is king, a world filled with sous vide bags and tweezers, where food has become highly technical and wabi sabi is frowned upon. And as I watch Chef Shimizu put on a latex glove and begin meticulously adding the onions in increments, delicately tossing the shaved onions in the warm butter, ensuring that each slice is perfectly coated, I realize that there is a poetic juxtaposition with what is going on in Anis and the world outside, it is a beautiful thing to watch a man hold on to his beliefs in a world that constantly shifting around him.

Chef Shimizu has a very specific vision for the texture of the meat that he serves. “My meat must have bite”, as he gestures with his hands and teeth to mimic chewing, “This is not what most Japanese people enjoy.”

As my first main, he serves a dish of Wild pork from Wakayama, the meat is quite lean and the lack of intermuscular fat and high connective tissue makes this a bit more chewy than what we have come to perceive as ‘ideal’. I can see what he means, but at the same time, the flavour of the pork is outstanding, it has an inherent sweet, acorn taste that just seems to continuously expend flavour the more you chew. In a Japan raised on the notion that ‘fat is flavor’, where the Kurobuta and Wagyu reign supreme, Shimizu is showing the world that meat which melt on the tongue can in fact be very tasty.

Finally, at 1.30pm, 4.5 hours after the chicken was first put onto heat, the dish is finally served. The star of the show is the chicken breast which is incredibly moist, but also has a sort of slightly chewy resistance or bounce that you do not get when you cook chicken sous vide. It is the best I have ever tasted, and in that moment I realize that sometimes the end product more than justifies the means. 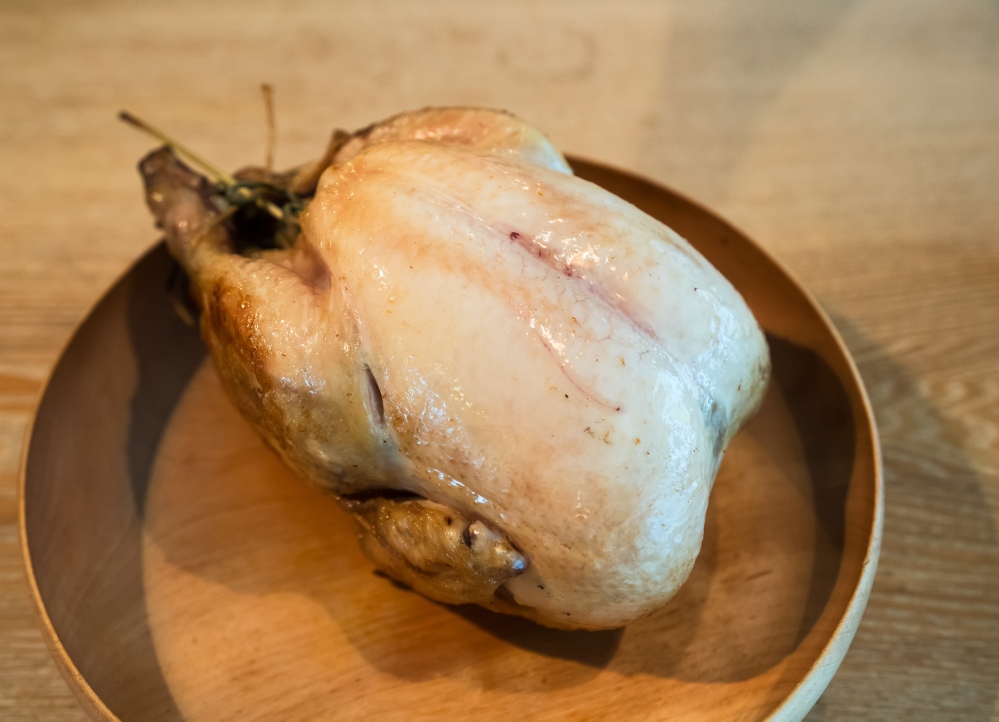