I have to say that I have a newfound respect for writers in general- the amount of mental capacity it takes to write a coherent and informative article, let alone an intelligent one, is no mean feat. After pushing out post after post leading up to the Fat Duck, I refused to log into wordpress for a good month because I was sick of staring at the blank box I am currently typing into; whoever said that a blank canvas is the perfect vessel for creativity, clearly did not have as many backdated articles as I do. Moving on…

The Hinds Head is owned by Heston Blumenthal for those who don’t know. Although it is just across the road from the Fat Duck, the kind of food served could not be more different, it essentially serves English classic pub grub, such as chips, pie, and scotch eggs. Since the Fat Duck doesn’t serve Heston’s infamous triple cooked chips, and we did not have a reservation at his London eatery- Dinner by Heston, the Hinds Head was the best chance I had at trying these damned elusive chips. As such, I had the ambitious idea of having dinner at the Hinds Head after our lunch at the Fat Duck.

Well, not right after, I planned it such that we had a 2 hour break in between the meals. What were my plans for those 2 hours? Hmm… I had none. Towards the end of our meal at the Fat Duck, we asked 2 different waiters if there was anything we could do to kill 2 hours in Bray. Both waiters immediately drew blank looks, it looked as though we had just asked the final and toughest question in a “Who wants to be a millionare?” gameshow (Yes waiter, you are answering for tips). As it turns out, there really is absolutely nothing to do in the village of Bray.

We left the Fat Duck at about 5.30pm, stepped out into the freezing cold. I had forgotten to take into account that it would be completely dark by then, and there was no way I could forsee that Bray would have so little street lights, it could easily feature as the set of most murder films.

Wandering around in the darkness, we managed to find our way to The Waterside Inn, Brays other 3 Michelin Starred restaurant. It is run by Alain Roux, who has helped Heston out a lot during the early days of Heston’s career. On a side note, The Waterside Inn is also the first restaurant outside of France to retain all 3 stars for 25 years. Impressive. We stood by the side of the lake where The Waterside Inn overlooks, our main source of amusement were a bunch of ducks/swans wading around in the water, unamused by our presence.

Yeah the water is pretty cold

We eventually got bored of staring at the ducks and decided that we should just head back to Hinds Head and pray that they would give us a table. We arrived at approximately 6.10pm, and were quickly told that the restaurant only opens at 6.30pm, plus there would be no promise that we could get a table, our reservation was for 7.30pm afterall. By this time, the bar area was already buzzing, and we sat down for drinks while waiting for the maitre d’ to arrive. As luck would have it, we were quickly whisked to a table after a few minutes of waiting. We tried to order as much as we could stomach, but don’t forget that we just had lunch at the Fat Duck

Such a quintessential British food, but when done right, oh boy is it delicious. This was done with a perfectly cooked quail egg, the yolk still runny so that it gave the dish a luxurious creamy mouthfeel when you ate it. It had a good amount of minced meat that managed to hold onto its juices and survived the fryer nicely, the only criticism is that the meat mixture was quite heavily seasoned and spiced, but thats what the mustard on the side is there for. The coating of breadcrumbs was thin, but very very crisp, exactly as they should be. We had to order another serving of this, no prizes for guessing how well this went down. Good 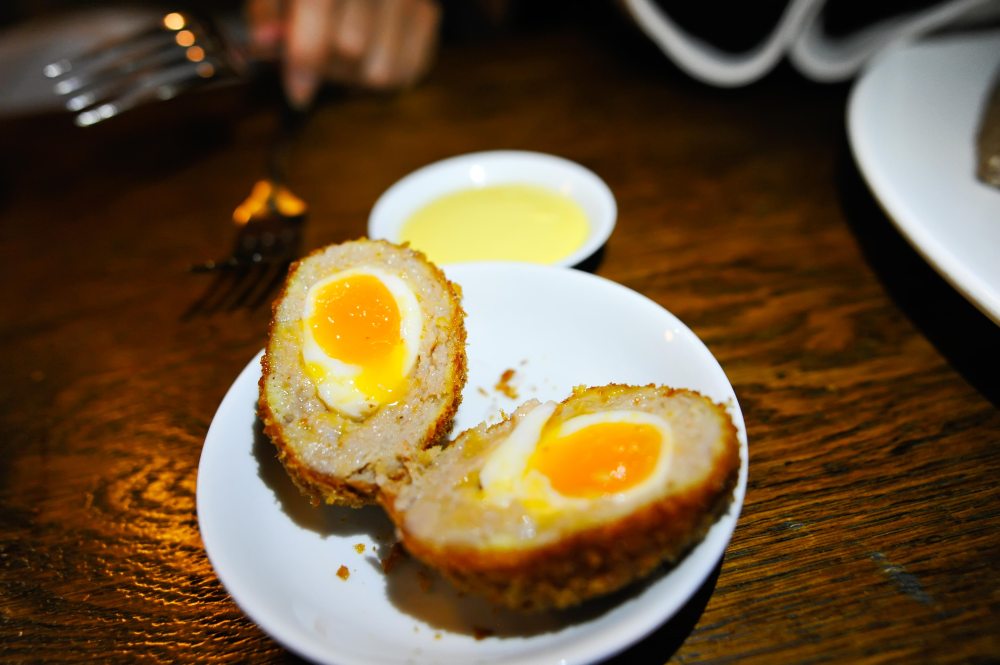 The recipe for this can be found in the “Heston at Home” cookbook. The colour of the soup was beautiful, it just gives you a very vibrant, homely, fresh feel to it. Ironically, frozen peas are used in this dish. The flavor of the soup was phenomenal, pureed till a velvety smooth consistency, slightly aerated with an immersion blender to give it a little bit of froth and lightness right before it is served. It was also more runny, and not as viscous as a normal pureed soup. There were substantial chunks of ham, and more importantly, there was a delicate balance between the saltiness of the ham and the sweetness of the pea, neither overpowered the other, although it did get fairly heavy as you reached the end of the bowl. Good 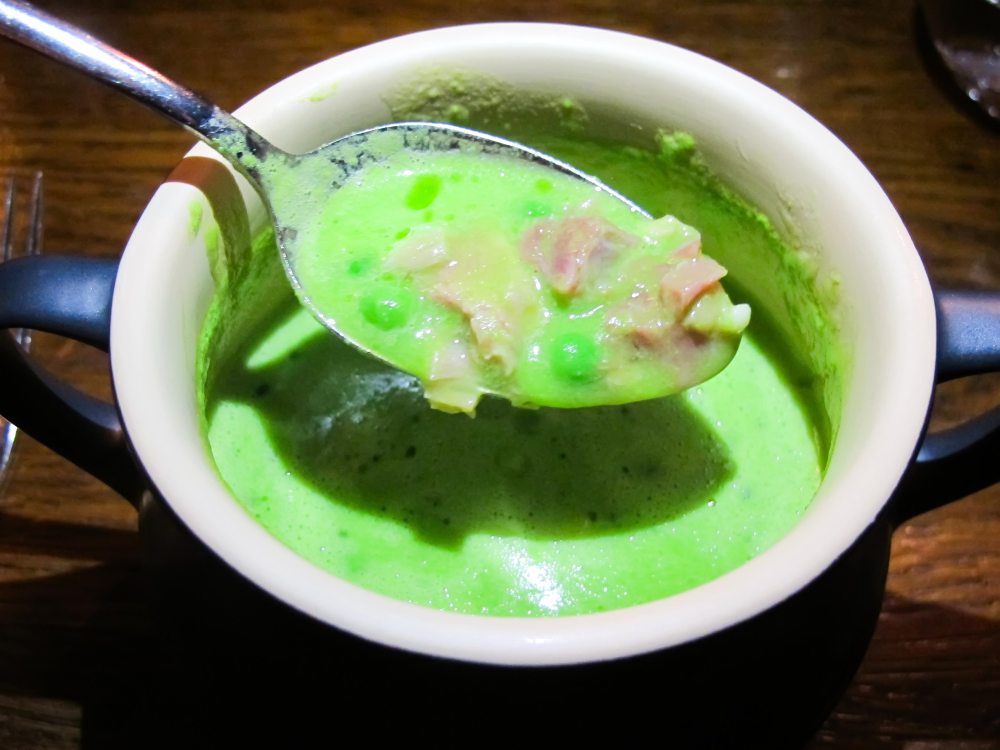 Perhaps I have not eaten much smoked salmon in my life, but this was the first instance where the salmon really highlighted the aroma of the tea perfectly. My impression of smoked salmon is always a very aggressive smoky aroma, heavy handed on the salt, whereas this version was delicate and smooth. As you eat the salmon, once the initial saltiness of the salmon has died down, the aroma of the tea suddenly shines through. Im not sure what soda bread is, but I found it a little dry, with a slight sweetness on the tongue. Easily the best smoked salmon Ive had. Very Good

This was overseasoned for us. It had nice crust on the top which gave a contrast to the soft, creamy center of the pie. The fried sweetbread also added an interesting complex taste without too much of the offal smell(I cant take too much sweetbreads). But overall, it was hard to get past how salty it was. Bad

The moment of truth, an unassuming bowl of golden yellow rectangular blocks was placed on the table. Oh how I have dreamt of this for ages. The triple cook chip was the first technique and recipe that Heston truly calls his own, he developed the method through trial and error when the Fat Duck first started out. It was only after he enlisted the help of scientists, that he was able to completely understand why the method works as well as it does. Potatoes(2-3 specific varieties work best) are first boiled to the point where they are falling apart, they are then drained and dried out. Then they are fried at 120C, drained and dried out again, before a final fry at 180C.

The result? Heston proclaims that the texture of this chip is similar to that of glass, it should shatter in your mouth. I think that description is taking it a little too far, but I will say that it is the best chip I have ever eaten- its pretty damn crispy, and fluffy on the inside. Two orders of this as well. Very Good

This is Hestons take on a 17th century English dessert. It literally quakes(wobbles?) when it is served, just to give you an idea of the consistency. It is essentially a warm panna cotta, flavoured mainly with vanilla, with nuances of nutmeg and cinnamon; because it is served warm, it went down a lot heavier than it really was. I was stuffed at this point and I didn’t really care for it. Okay 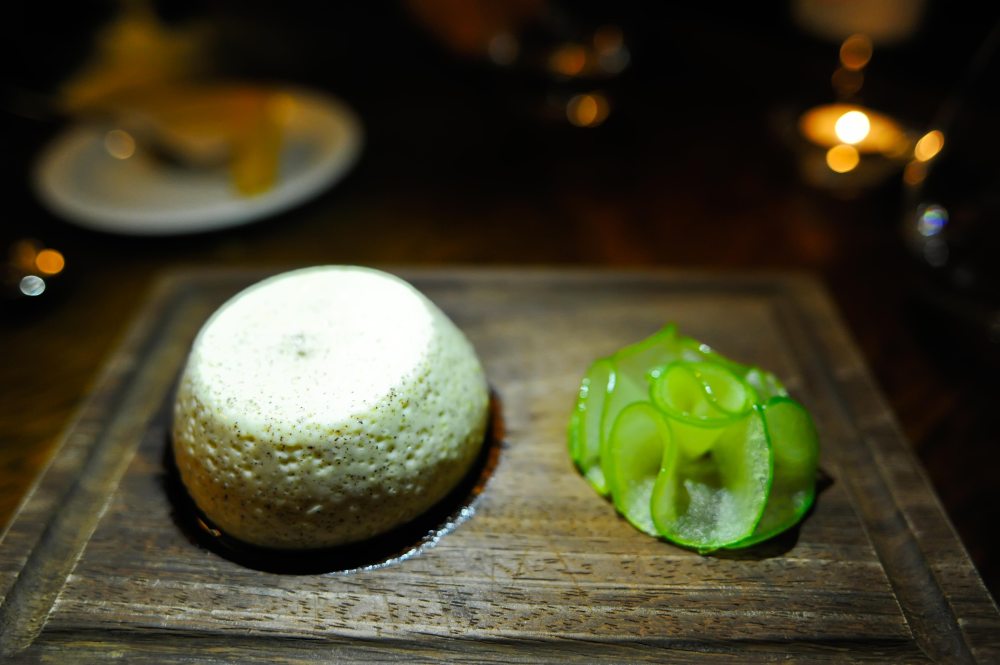 I couldnt figure out why I ordered this upon reading about it in the menu, until I returned to Singapore and flipped open my Fat Duck cookbook, its a dessert that has featured in the Fat Duck. The chocolate wine slush was absolutely delicious, the combination of chocolate and that grape-y flavour was delightful, with a slight alcoholic kick towards the end. I dont remember much about the shortbread so I dont want to say too much about it, but I do remember being surprised that the shortbread yielded alot easier than the other shortbread biscuits that Ive had (it was soft and crumbled easily). Now, if only the 7-11 near my house had chocolate-wine slurpees… Good 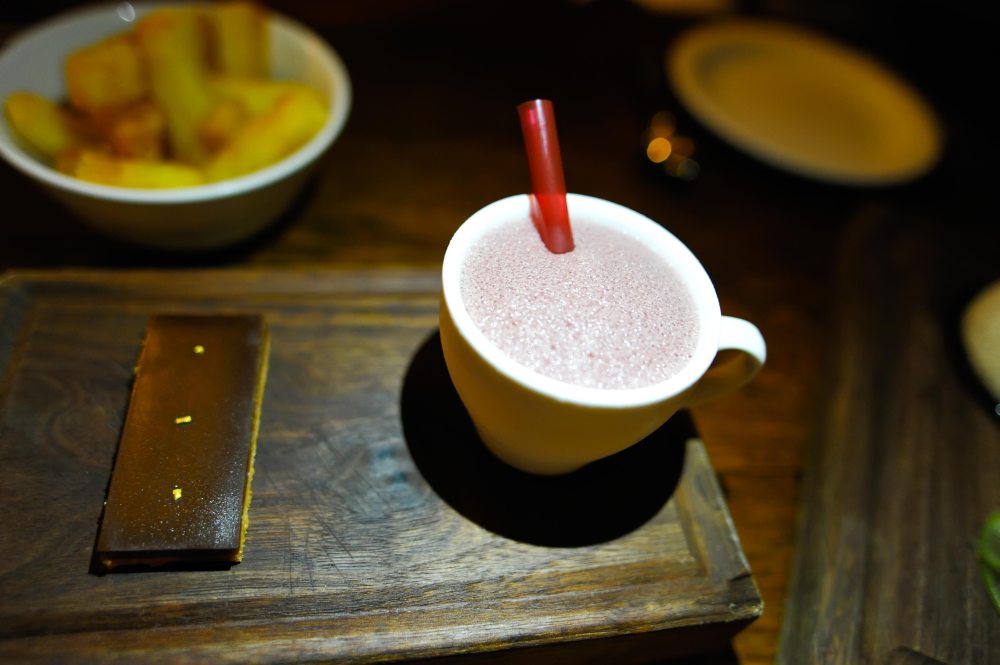 Its clear that Heston Blumenthal isn’t isolated to a 3 Michelin starred setting, he can put out delicious pub food as well, and its no surprise to me that his Dinner by Heston restaurant is getting rave reviews. If I know that a chef cooks in a scientific manner (Im not talking about using techniques found in molecular gastronomy, Im talking about a chef to takes time to understand why things are done a certain way), I immediately have high expectations for the food, regardless of whether he runs a 3 star restaurant on a bistro.  I do believe that exploring the science behind food will inevitably lead to a path that takes food forward, and help to improve upon it, be it by creating new flavour combinations, new textures in food, or new kinds of equipment. Heston is a shining example of someone who has chosen to walk down this path, and he continues to be an inspiration for me, and many other amateur cooks alike.